A Letter to District 48

3 years ago
Terry Baab
From Our Members 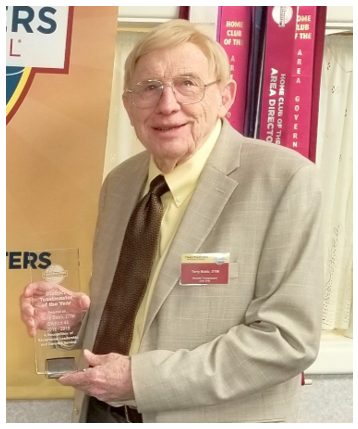 Thank you ever so much for awarding me the 2018-19 District Toastmaster of the Year Award. I’m stunned beyond belief because I could walk into any District meeting and easily point out 20 other Toastmasters that could qualify for the honor. The quality and caliber of leaders throughout District 48 is amazing to say the least.

What made the award even sweeter for me is that it was presented to me in front Dunedin Toastmasters, my home club. Any and everything I accomplished in my Toastmaster years was with the enthusiastic support and dedication of other members of this club. Whenever I needed help, they were there.

At the District Level, I have been so gratified by the responsiveness and assistance I’ve received anytime I encountered problems — even though most of those problems were probably caused by me to begin with.  I’m 76 now. I first joined Toastmasters in Houston, TX, about the time I turned 30. I’ve learned so much…met so many fine people…and had so much fun.

What a great ride it’s been.   Thank you again.