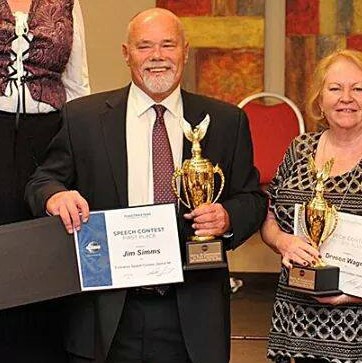 My Toastmaster Journey – How I Learned To Pause

Opportunity does not knock, it presents itself when you beat down the door.” Toastmasters is an opportunity to make a powerful difference when those positive voices – Beat the Door Down!

I never heard of Toastmasters until 1982. I was an unfulfilled Banker who chose that career by chance after I graduated Fairfield University with a B.A. in English. My College Roommate, Richard Dwyer, was working in the Trust Department at heritage Chase Manhattan Bank. He told me the bank was hiring so I sent in my resume and when I was asked at the Interview if I were hired where would I like to work…I said the Trust Department. The HR person said there were no openings there but they had one in the Loan Review Department which analyzed various loan portfolios throughout this huge banking corporation. In 1972 I found a new job with a raise at National Bank of North America which was later acquired by National Westminister Bank based out of England. The years marched on and if I had listened to my Inner Voice I would have become a teacher especially after two or three education courses I took at Hunter College. Instead I went to St. John’s University and got an MBA in Finance.

Following the example of my late Brother Richie, who was a member of the Central Islip Volunteer Ambulance, I joined my volunteer ambulance in Little Neck, Queens NY in 1977. I was a certified Emergency Medical Technician (EMT) and became a CPR Instructor for the American Red Cross. In that capacity I taught courses, including certifying CPR Instructors, and made community presentations. That was where I first heard of this organization called Toastmasters. In 1982 I was presenting to a group of parents at a middle school urging them to learn CPR and have a fire escape plan for their kids and of course check those smoke detectors. Along with me was a gentleman who was a new Red Cross Volunteer. He knew very little about Toastmasters but was well dressed and spoke eloquently seemingly with confidence. I learned he had only joined the Flushing Toastmasters Club in District 46 SIX months before! I didn’t look up Toastmasters. I didn’t visit a club I just continued with my um’s and ah’s and other filler words almost never stopping for a pause for 15 more years!.

I lost my banking job while I was on vacation in Florida! Rather than a door closing it was a new one opening. Non-Profit fundraising for United Way was a much better match for my love of community. Two years after joining United Way of Long Island Julie, our Marketing Manager, invited me to go with her to EZ Speakers Toastmasters’ lunch meeting. I joined that club in October 1997 and I’ve been addicted ever since!

In fact before I left New York City in 2003, with the sounds of destruction from witnessing the collapse of the Twin Towers still fresh in my psyche, I belonged to four clubs in District 46 and was Mentor to the brand new Hofstra University Graduate School of Business Toastmasters where the Dean considered requiring Toastmasters as a prerequisite to earning an MBA because he believed communication skills was an essential ingredient to any career success.

What are the Voices I hear when I’m invited to deliver a speech at Carrollwood Toastmasters which I joined in 2014 or to an outside community group like Rotary? Let me summarize a few things I’ve learned that I sometimes remind myself to do:
1- Rehearse Your Ideas vs. Memorize Your Speech – I was at MAD Toastmasters in Midtown Manhattan (Some crazy members but we met at New York Life Insurance headquarters on MADison Avenue) when I delivered my first speech at that club in 1998. One of our members was a Voice Coach who came up to me afterwards and commented “You memorized your speech?” I said yes. How did you know? She said “I saw your eyes roll back in your head twice as you tried to find your place!” After that I used to construct my speech entirely using Bulleted Notes. Since I retired in July 2013 I have more time to write out my speech but incorporate those Bullets to help me practice. Recording #CarrollwoodToastmasters speeches on YouTube and getting feedback from Bob Turel, who I met in 2004, really helps on anyone’s Toastmasters Journey.
—————————————————————————————————-
2- Eye Contact – At that club that met on MADison Avenue I was once known as “The Glancer”! Sure I made eye contact but it was fleeting at best! A Toastmaster said “Every time I looked into my audience’s eyes, their eyes became laser guns, shooting right into my eye balls…” Pick out the eyes that smile at you… One set of eyes per thought or 5-8 seconds on each person.
————————————————————————————————–
3 – Use Pauses – They work. Do it before and after a sentence that matters! 23+ years as a Toastmaster yet it was Olivia Schofield at a District 48 workshop who suggested I embrace the concept that to Fail To Pause is to Deny Your Audience the time to absorb your message.
—————————————————————————————————-
4- The Audience – Know who your audience is before you start to speak! Remember 99% of your Audience wants to see you succeed! “Make your audience the hero” said a former member at Suncoast Toastmasters.
—————————————————————————————————-
5- Tell A Story – Be Conversational – You’re not Making a speech rather you are telling a story. Feedback that I love to hear includes It didn’t sound like you were making a speech. “It sounded like you were having a conversation”. I have always considered Toastmasters to be a Gift with great Power to tell the stories that lie within each of our hearts. When you tell the story right you can become – touching, inspiring and, well, memorable.
————————————————————————————————-
Perhaps the biggest reason I believe in Toastmasters with my entire heart is the fact that I got my job in Florida in 2003 BECAUSE of Toastmasters. When I retired from Youth and Family Alternatives Inc. as Community Relations Manager in July 2013 I asked our CEO who had become my friend, “George, looking back did you hire me because of Toastmasters?” He said absolutely that he believed I could articulate a message about a multi-faceted non-profit serving 13 Florida Counties yet was not very well known. George believed I could deliver a powerful message raising awareness and much needed funding! There are so many who are awaiting that introduction to come visit a club either in person or from the comfort of their home PC! I am glad to have seen many do exactly that.